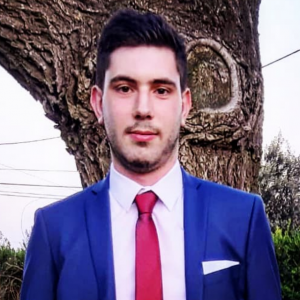 Currently I am working as an Early Stage Researcher (ESR) for a PhD degree as a part of a research network in Materials for Neuromorphic Circuits (MANIC). My role as a Master in Micro and Nanotechnology Engineering is to utilize my knowledge in both Material Science as well as Electrotechnical Circuit Design to build and investigate Memristor device working dynamics. In collaboration with our team, we aim to demonstrate some brain-like learning functionality into a physical circuit fabricated using only CMOS compatible processes.

This project aims to engineer the synaptic plasticity of epitaxial and polycrystalline memristive oxide thin film devices from short-term plasticity to long-term potentiation. This so called metaplasticity inherent to biological systems is employed to implement different types of learning algorithms. The plasticity is modified by the interplay of thin film processing conditions (defects, interfaces) and the sequence of electrical stimuli. It should clarify the interplay between pristine microstructure, filament formation, dynamics of oxygen vacancy movement and synaptic plasticity. The PhD is containing thin film growth by PLD, electrical testing over a high dynamic range, conductive-tip AFM and in operandomicrospectroscopy (PEEM) to monitor filament formation. The main part of the research is performed at PGI-7 of Forschungszentrum Jülich, Germany. Additionally, Nuno is spending the secondments at the Bernoulli Institute for Mathematics, Computer Science and Artificial Intelligence, University of Groningen, the Netherlands to develop algorithms for PEEM image analysis (0.5 month), at the University of Groningen, the Netherlands for the exchange about device properties and circuit design (1 month) and at the University of Twente, the Netherlands (1 month) and Twente Solid State Technologies, the Netherlands (1 month) for the growth of heterostructures by PLD and the growth on Si, respectively.

Forschungszentrum Jülich, member of the Helmholtz society, is one of the largest European research centres. It partners with the RWTH Aachen University via the Jülich-Aachen research alliance JARA, in particular JARA-FIT in the area of future information technology. RWTH Aachen University ranks among the eleven German universities, which were recently successfully approved for funding for a period of at least seven years in the German Universities of Excellence funding line.

Institute of Electronic Material (PGI-7), directed by Prof. Rainer Waser belongs to the international leading groups in the field of ferroelectric and resistive switching oxides. PGI-7 has a broad activity on different resistive switching materials, such as binary and complex oxides, higher chalgogenides, and organic materials. These activities are embedded in the Collaborative Research Centre SFB 917 (www.sfb917.rwth-aachen.de) and are interlinked with projects directly funded by semiconductor industry.