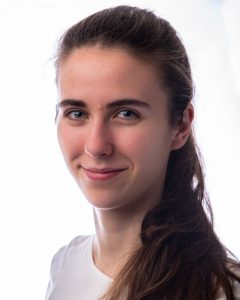 Starting in 2014, Nele studied mechanical engineering with specialization in mechatronics at the University of Duisburg-Essen in Germany, where she also worked as a tutor and research assistant during that time. In her bachelor thesis Nele worked on the simulation of vehicle dynamics using LSTM artificial neural networks, and in her master thesis she worked towards automatically detecting the kinematical model of a series manipulator from RGB-D video data. She finished her M.Sc. in 2020 with distinction and as highest-ranking student in mechanical engineering of her year. In September 2020 she started her PhD-position at IBM Research – Zurich. Her work focuses on the thermal analysis of devices for neuromorphic computing, exploring and exploiting working principles of nanoscale devices for synaptic functionality.

Candidate devices for neuromorphic computing act as artificial neurons or synapses and base their function on memristive or nonlinear electrical properties. The switching capability is oftentimes triggered through complex self-heating mechanisms. The project is studying such effects in demonstrator devices and small circuits based on relaxation oscillators fabricated from materials with a metal-insulator transition and phase change memory cells. Expected tasks comprise device fabrication in IBM’s Binnig & Rohrer nanotechnology center as well as material and device characterization with state-of-the-art metrology techniques such as electronic and thermal transport tools, thermal scanning probe microscopy and surface chemical analysis. Moreover, modeling and testing of the neuromorphic circuits up to simple image recognition operations are performed in the course of the project. The main part of the research is being performed at IBM Research – Zurich. Additionally, Nele is spending the secondments at the Zernike Institute for Advanced Materials, University of Groningen, the Netherlands (1 month) and the Department of Earth Sciences at the University Cambridge, United Kingdom (1 month).

IBM Research – Zurich is the European branch of the IBM Research Division. It has made major contributions to the advancement of knowledge in material science, nanoscience and nanoscale physics stimulated by problems relevant to technology. Research in the Science & Technology department is concentrated in the fields of neuromorphic and quantum computing, nano­technology and future emerging devices, smart systems and materials science. IBM Research – Zurich is the first industrial research lab, which received the Historic Site Award of the European Physical Society for its contributions to physics including the Nobel prizes of 1986 and 1987, and the Kavli prize in nanoscience in 2016. The Binnig-and-Rohrer Nanotechnology Center (BRNC) at IBM Research – Zurich, provides a 1000m2state-of-the-art infrastructure for semiconductor device processing with up to 200mm capability for fabrication and analysis. Extensive electrical measurement capabilities for device characterization such as low-level current and low-temperature measurements and frequency-dependent characterization are available in a specially shielded environment (“noise-free labs”).