Memristors based on oxides with metal-insulator transitions 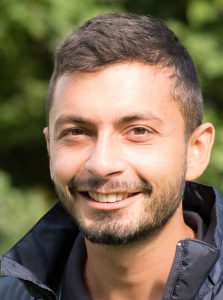 Evgenios is a doctoral candidate in the group of dr. Pavlo Zubko at University College London. His research focuses on the physics of ferroelectrics and correlated oxides materials and their implementation as artificial neuromorphic computer units.  Evgenios is an ambitious and curious person with a strong desire of continuous development as an independent researcher. He has a background in interdisciplinary science (solid-state physics, condensed matter, materials chemistry) obtained during his bachelor degree (BSc Physics at Aristotle University of Thessaloniki) and master degree (MSc Nanoscience at University of Groningen). He has participated in various research projects spanning organic opto-electronics and ferroelectric memories. Apart from research, he is interested in learning languages and adding multicultural values, and he believes that “universities should be playgrounds” as the 2016 Nobel Laureate Ben L. Feringa stated.

Memristors based on oxides with metal-insulator transitions

This project is exploring the memristive properties of oxide heterostructures combining materials that display metal-insulator transitions and ferroelectricity. The main part of the research is performed at the Department of Physics and Astronomy, UCL and the London Centre for Nanotechnology. During the project Evgenios is spending the secondments (collaborating labs and industry partners) at Ecole Polytechnique Federal de Lausanne, Switzerland for low temperature SPM during MIT (1 month), and at the University Picardie Jules-Verne, France for modeling of memristive behavior (0.5 month) and at CrysTec GmbH, Germany for substrate preparation (0.5 month).

Based in Bloomsbury, UCL is a welcoming, inclusive university situated at the heart of one of the world’s greatest cities. It is one of the world’s top universities whose staff and former students have included 29 Nobel prizewinners. It is a truly international community: more than one-third of our student body – more than 35,000 strong – come from 150 countries and nearly one-third of staff are from outside the UK.

The Department of Physics and Astronomy is right next door to the London Centre for Nanotechnology – an interdisciplinary joint enterprise between University College London, Imperial College London and King’s College London. The Centre occupies a purpose-built eight story facility in Bloomsbury, as well as extensive facilities within different departments at South Kensington. LCN researchers have access to state-of-the-art clean-room, characterization, fabrication, manipulation and design laboratories. LCN’s experimental research is complemented by leading edge modeling, visualization and theory.