Iurii Tikhonov: PhD at the University of Picardie, France 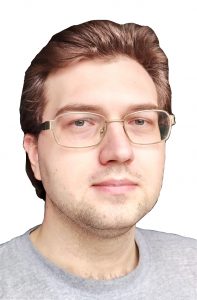 Iurii is a researcher with a background in programming and experimental physics. Throughout his BSc and MSc degrees at Southern Federal University, he has applied strain engineering techniques to ferrolectric heterostructures, investigating ways to control their properties with introduction of deformations and coexistence of soft mode and central Debye-like excitation in such systems. After graduation, he took a chance to try himself outside academia. That’s how he ended up in the field of industrial programming, working on the development of software with an emphasis on high-performance and low-latency data processing. Acquired programming skills allowed him to start the new stage of his scientific life. Working at the interface of physics and emergent IT technologies, he conducts large-scale simulations of topological excitations in ferroic materials now.

Atomically small topological excitations (TE): domain walls, vortices, and skyrmions can be used as memory units in neuromorphic computing. Study of TE in functional oxides can emulate the dynamically learning interconnects in brains. Using numerical modelling and working in close collaboration with experimentalists of the Consortium, Iurii is simulating the dynamics of TE to optimize them for information processing. The main part of this research is performed at University of Picardie, France. Additionally, Iurii is spending the secondments at University College London, United Kingdom for Modeling of the M-I materials (1 Month) and at IBM Research –

Zurich, Swittzerland to Exchange knowledge on simulation strategies (0.5 Month).
The University of Picardie is a young developing French University, created in 1970 and having approximately twenty thousand students. The faculties are Science, Low, Arts, and Medicines. Development of Material Science researches and corresponding MSc and Ph.D. training is one of the priorities of University and Province of Picardy.  Principal expertise of the Physics Department is the study of epitaxial films of multifunctional oxides. The theory group provides theoretical and numerical modelling of nanoscale ferroelectrics and multifunctional materials for potential application. Equipment: a distributed memory calculator: 1680 compute cores, the computing power of 7.1904 teraflops, 12.3 TB of memory – Intel (R) Xeon.