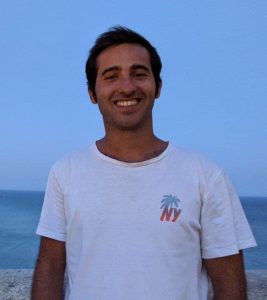 Tomasso is an Italian engineer graduated in electronics engineering at the universities Politecnico di Milano and Ecole Centrale Paris, whithin a Double Degree educative program. Prior to IBM, he worked on the design and simulation of analog integrated circuits at SK Hynix. The focus of his research is about the development of ReRAM devices engineered to perform the task of training of neural networks efficiently. Tomasso built his core knowledge about neuromorphic computing during his Master thesis in the lab supervised by prof. D. Ielmini, where he co-authored a ICECS 2019 conference paper about the fabrication and characterization of volatile HfOx/Ag RRAM devices. His interests outside academic and industry research are running, skiing and playing tennis.

Domain walls in ferroelectrics could offer the possibility to fabricate devices with a gradual and reversible change in their electrical conductance and, thus, be usable as synaptic elements. The demonstration of ferroelectric tunnel junctions that mimic the plasticity of biological synapses, as well as single wall motion in constrained geometries, have shown that ferroelectric domain walls can be used for neuromorphic processing. This project aims to develop and experimentally realize concepts of exploiting ferroelectric domain wall motion for integrated synaptic elements for neuromorphic circuits. These novel ferroelectric devices are integrated in a CMOS compatible platform. The main part of the research is performed at IBM Research – Zurich, Switzerland. Additionally, Tomasso is spending the secondments at the Zernike Institute for Advanced Materials, University of Groningen, the Netherlands (1 month) and University of Zurich, Switzerland (1 Month).

IBM Research – Zurich is the European branch of the IBM Research Division. It has made major contributions to the advancement of knowledge in material science, nanoscience and nanoscale physics stimulated by problems relevant to technology. Research in the Science & Technology department is concentrated in the fields of neuromorphic and quantum computing, nano­technology and future emerging devices, smart systems and materials science. IBM Research – Zurich is the first industrial research lab, which received the Historic Site Award of the European Physical Society for its contributions to physics including the Nobel prizes of 1986 and 1987, and the Kavli prize in nanoscience in 2016. The Binnig-and-Rohrer Nanotechnology Center (BRNC) at IBM Research – Zurich, provides a 1000m2state-of-the-art infrastructure for semiconductor device processing with up to 200mm capability for fabrication and analysis. Extensive electrical measurement capabilities for device characterization such as low-level current and low-temperature measurements and frequency-dependent characterization are available in a specially shielded environment (“noise-free labs”).