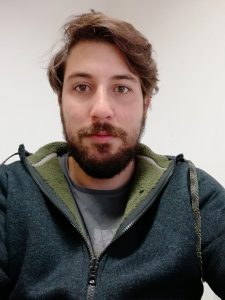 Panagiotis Koutsogiannis obtained his bachelor’s degree in physics in 2017 with a major in solid-state physics and electron microscopy from the Aristotle University of Thessaloniki. In 2018, he moved to the Okinawa Institute of Science and Technology where he mastered the lamella preparation and induced deposition techniques by dual-beam Scanning Electron Microscope. Recently, he received his master’s degree in Nanoscience at the University of Groningen where he gained experience in preparation and characterization methods in the field of Nanotechnology. In 2020, Panagiotis joined the European program MANIC to serve as the microscopist of the network and assist the “building” of the Materials for Neuromorphic Circuits. His research focuses on the structural and chemical characterization of oxide thin films presenting domain walls by Transmission Electron Microscopy.

This project focuses on the atomic resolution characterization by Transmission Electron Microscopy (TEM) of the structure and chemistry of oxide thin films presenting domain walls with properties distinct from the host material, particularly conducting DWs in insulating films, which are functional for neuromorphic computing. Correlating the atomic structure with theoretical simulations and macroscopic characterization is key to understand the microscopic origin of DW functional properties. The main part of the research is performed at the Institute of Materials Science of Aragón (ICMA, http://www.icma.unizar-csic.es), in Zaragoza, Spain. Additionally, Panogiotis is spending the secondments at at University of Cambridge, United Kingdom for modeling and ab initiocalculation of DW properties (1 month) and DENSsolutions, the Netherlands for in situTEM biasing of DWs (1 month).

CSIC (Spanish National Research Council) is the largest public R&D institution in Spain, and the 3rdlargest in Europe dedicated to multidisciplinary scientific and technological research. The CSIC has 123 institutes, 53 of which are joint research centers in partnership with universities. Among these, ICMA was created in 1985 in partnership with the University of Zaragoza (UNIZAR) to promote research of excellence, transfer of knowledge and staff training in Materials Science. Founded in 1542, UNIZAR is the main academic and R&D center of the Ebro Valley in Spain, with 33.000 graduate students, 2.500 postgraduate students and 3.000 staff. UNIZAR will be the academic institution granting the PhD degree to the ESR.

UNIZAR is also host of Laboratory of Advanced Microscopy(LMA, http://lma.unizar.es), a national research center for Electron Microscopy and Nanocharacterization, unique in Spain. The ESR will be granted regular access to last generation aberration corrected TEM instruments, as well as top-notch nanofabrication and scanning probe facilities.